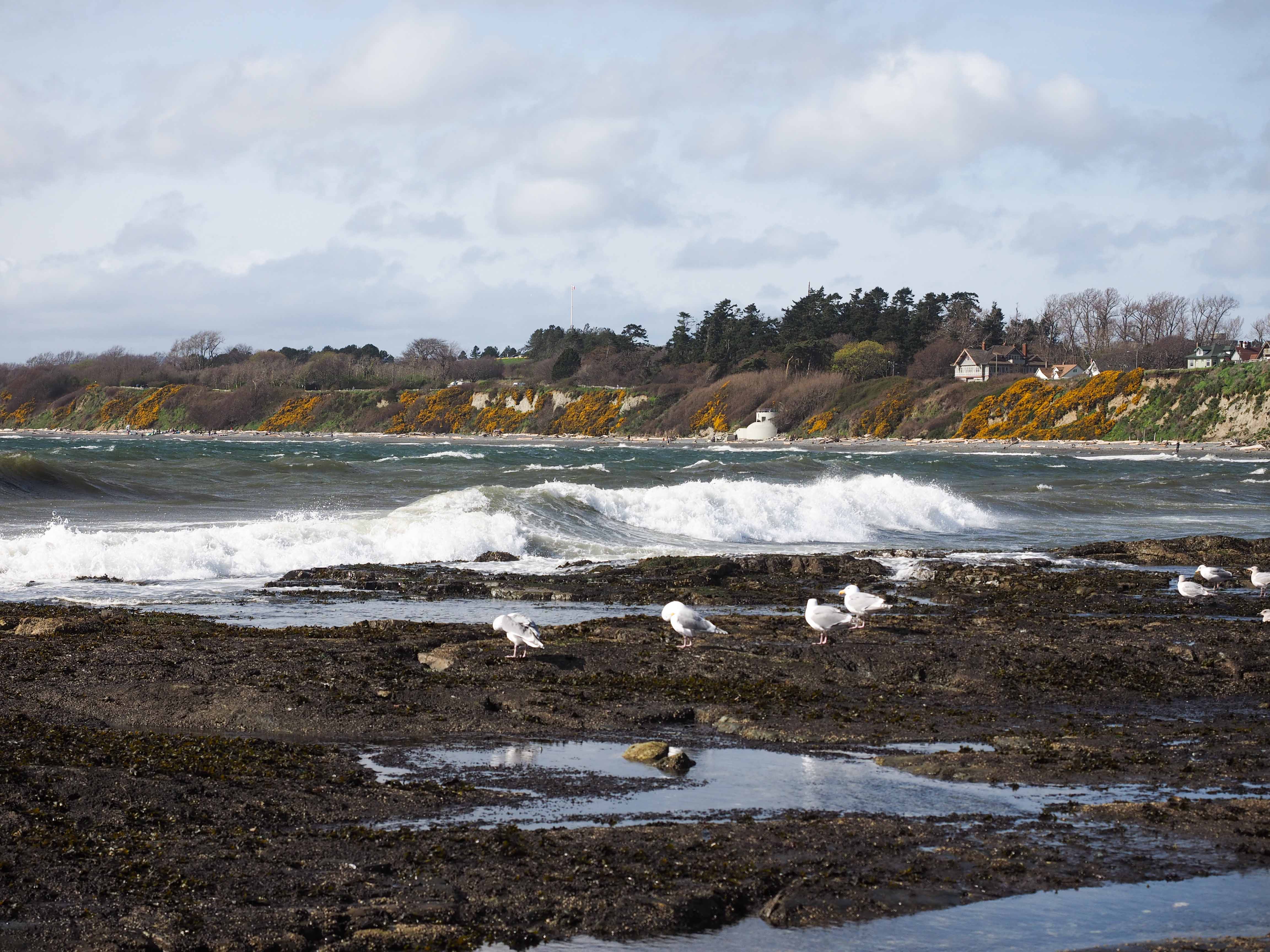 The updated Olympus OM-D  EM-1 MkII was released late in 2016, although it wasn’t widely available until early 2017, so it seems.  Nice camera.  Good update to original EM-1.

Why I use the Olympus OM-D EM-1 camera

I have been using the Olympus OM-D EM-1 for more than three years now as my primary camera.  Here’s why. (Update: moving to a Nikon D850 full-frame, to address some of my reservations about the micro four-thirds format.)

EM-1 is a great camera to handle and use.

The EM-1 is smaller than a full-frame Canon or Nikon, yet it feels very solid and sturdy in your hands.  The camera body (and the Olympus Pro lenses) are very well built, sturdy, and weather resistant.  By contrast, the Nikon D850 is a beast, especially when fitted with one of the Sigma full-frame lenses (e.g., the Sigma Art 24-70mm f/2.8).  When you’re climbing hills, there is a big difference between carrying the Olympus and the Nikon, after a few hours.

The Olympus is not bulky, yet it accommodates a larger zoom lens comfortably. I find it’s comfortable using the EM-1 body with the 40-150mm f/2.8 pro zoom. However, I have been using the Nikon more and more frequently of late, and I have acquired the ‘muscle memory’ to use it efficiently.  Switching back to the Olympus requires an adjustment now.  I find the Nikon controls are more intuitive than the Olympus.  For example, the location of the power switch on the EM-1 is decidedly awkward compared to the Nikon – in front, just below the shutter button, where it should be.

EM-1 has controls to adjust every setting

The EM-1 has a control that will let me adjust just about everything.  It has all the dials, buttons and levers I want (and then some).  I confess that there are buttons on this camera that I have never used, and some that I can’t even say what they’re for.  As I use the camera more, however, I am inclined to push it a bit harder, and I have learned a few more secrets to getting the most out of it.

I suppose that, since I grew up in a bygone day when cameras weren’t automatic (you had to use a light meter to measure the light, then set the aperture and shutter speed manually, then focus, then shot – and hope for the best), I am not inclined to use some of the controls that the EM-1 offers.

The EM-1 is a rugged and water-resistant camera

It’s rugged and weatherproof.  I don’t have a case for my EM-1.  I often just turn the lens shade on the 12-40 mm f 2.8 zoom around, put on the lens cap, and throw the camera into my backpack with my umbrella, my lunch, whatever books I may be packing to work, other assorted junk (like charging/USB cables, etc.) and away I go.  I take my EM-1 with me everywhere.  I take it when I travel for business, even for the day.  I even take it with me when I take the dog to the beach.  So, my camera suffers from a lot of abuse.  You can see from the photo at the top of this post that the paint has been knocked off the corners, but hey, a camera is meant to be used.  I also take pictures in the rain.  All in all the EM-1 has stood up perfectly.  Even though my EM-1 is getting a little bit beaten up and rough around the edges, but it still works perfectly  [Update: while changing a lens, I inadvertently dropped the camera body.  Luckily I broke the fall with my foot, but the camera bounced off the pavement.  No apparent damage.  It has continued to work flawlessly since the incident.]

The image stabilization is incredibly good in the EM-1.  “They” say that it will allow you to shoot hand-held with a 4 f-stop improvement.  I believe it.  I use the 12-40 mm f2.8 Zuiko zoom lens on the EM-1 almost all the time, and I have no difficulty using it at 40 mm (80 mm FF equivalent), handheld, without ever worrying about camera shake.  It just works.  If I use the 75mm Zuiko (above photo- a 150 mm FF equivalent focal length), I can still shoot handheld quite easily with shutter speeds down to 1/30 sec.  I remember with the old film cameras (and, of course, no stabilization) the rule of thumb was that the minimum shutter speed was the reciprocal of the focal length.  With my micr0 4/3rds 75mm lens, this would be a minimum shutter speed of 1/150 sec – which would have translated into 1/200 on my old camera (an Olympus OM-1, by the way). I LOVE the image stabilization.Just for fun, I took a photo of Stevie in a room that was very dimly lit by only one 60-W lightbulb.  I cranked the ISO up to 1600, f1.8, and took a handheld photo of Stevie with a 1/2 sec exposure with  focal length of about 24 mm.  Handheld.  No problem.

The autofocus is fast and accurate.  (update) – Well, pretty fast and pretty accurate.  Taking pictures of moving dogs presents a challenge, even in good light. I have missed a few opportunities.  But, overall, I’m still impressed.  And, the other nice thing about some of the Olympus lenses (not all of them, unfortunately) is that the user can click the focus ring back to switch from autofocus to manual focus, instantly, and without pushing any buttons.  It works flawlessly.  The Zuiko 12-40mm f2.8 zoom has this feature, for example.  The only thing you have to remember is that the manual focus operates independently of the autofocus – that means that if you manually focus the lens to a point that is 2m in front of the lens, then change to autofocus and let the camera focus on something at infinity, if you click to engage the manual focus, the lens will immediately re-focus to the 2 m distance that you ‘set’ the last time you used the manual focus.  This is actually a very useful feature, by the way – you can ‘remember’ the focus.  I should mention that the continuous autofocus works very well. It keeps the camera focussed so long as you keep the shutter button half-pressed.

I have tried to use the continuous AF with tracking (introduced with an update to the firmware for the camera) with limited success.  The EM-1 just isn’t that good at following a subject while shooting in burst mode with a moving subject.  No matter how hard I try, I can’t seem to get it to follow properly.

The Olympus lenses (Zuiko) are fantastic.  They have become quite expensive here in Canada since 2015.  The Zuiko primes are second-to-none, and I use them just for a change.  In fact, I find it a challenge to put a particular prime on the camera and then to take photos with it for a day or to.  I often use the 17mm f2.8 for this purpose.  I rarely do this with the 75mm prime.  The Zuiko 45mm f1.8 prime is also a great lens to use.

My two favourite lenses are the 7-14mm F2.8 Pro, and the 12-40mm f2.8 Pro zooms.  Anecdotally, I have started using a Nikon 28-120mm f4.0 zoom (on a Nikon D750, by the way), and it really is not the same calibre as the Olympus lenses.  The quality and feel of the Nikon lens is lacking; it’s not weather sealed; the zoom is cramped, especially at the short end (that is, to zoom from 24mm to 28mm only requires a few degrees of rotation on the zoom ring); and the Nikon lens is much more prone to distortion.

Overall, the EM-1 takes great pictures.  I know that the wisdom is that a good photographer can take great pictures with any camera, and that the best camera is the one you have with you at the time, but this camera has definitely allowed me to take better pictures than I have been able to take in the past.

I almost always shoot in the “A” mode – aperture priority.  I often change the ISO, and frequently adjust the white balance (although ‘Auto’ seems to do quite well), and always adjust the aperture to achieve the shot I want.  Because this camera will allow the user to capture RAW files, this is what I normally do.  Occasionally, if I know I am going to need to review or use images when I’m away from home (and Lightroom) I will set the camera to save both RAW and JPG images, but this is the exception.  The other thing I often change is the exposure compensation – I have the camera set so that I can change it by 1/3 of an f-stop increments.  The last control that I should mention, because I use it sometimes, is the sequential shooting mode.  For example, a few weeks ago, I was trying to photograph some bees gathering nectar from a flower, and I set the camera to take 12 frames per second.  Them bees wouldn’t hold still, even though I asked nicely.  By the way, in the last year I started to use the exposure compensation for highlights and shadows.  On my camera (still set up with the default button assignment), I can access it by pressing the little button immediately behind the shutter button. It has a wavy line on the top.  Turns out it’s really useful to adjust the exposure compensation for highlights and shadows independently.  Who knew? !!

All that said, I have some criticisms.

Please leave a comment if you have anything to add.  I’d love to hear what other people’s experience has been.